The business of Sta. Lucia Realty has grown beyond just the mastery of residential developments. It has likewise set itself apart as the country’s leading golf and country club developer. Its first tandem development of residential estates together with a golf and country club started with the very successful Royale Tagaytay Golf & Residential Estates in Tagaytay City, which boasts of being the only project of its kind to office night-time golfing, with its entire 9-hole golf course fully lighted. This was soon followed by its first major world-class golf & country club development.

The Orchard Golf & Country Club in Dasmariñas, Cavite, noted as the host of the most prestigious international golf tournament this country has ever seen, the 1995 Jonnie Walker Championship Tournament, with a roster of participants that included such golf legends as Greg Norman, Nick Faldo, Ernie Ells and Colin Montgomery.

This wave of initial successes brought about Eagle Ridge Golf & Country Club, the first and the largest golf development of its kind in Asia. Boasting of our 72-hole championship golf courses in one club, it further strengthened its prestige when it commissioned three golf masters, Greg Norman, Nick Faldo, Isao Aoki, plus foremost golf architect Andy Dye to design the courses. It is the only club of its kind to have three clubhouses to cater to the needs of its members, their families and guests.

From the country club development, Sta. Lucia Realty has also ventured into other areas of development. Having seen as opportunity to diversify which serving the leisure need to f the communities, it has successfully completed and operated beach clubs such as Vista mar Beach Resort in Cebu City; Club Morocco Beach Resort in Subic, Zambales; and Acropolis North Water Camp & Country Clubs in Cabanatuan, Nueva Ecija. Its most recent acquisition is the Southwaters Resort in Lucena, Quezon Province.

From its early years until now, Sta. Lucia has always wholeheartedly supported athletic programs and activities within and outside of the company. From its initial support given to boxing, it has invested in basketball. The company has also contributed to the development of golf as sport by hosting the Sta. Lucia Golf Tour. With the grand aim of boosting the national effort, to discover and produce fresh breed of Filipino athletes, Sta Lucia Realty is vigorously implementing the Sta. Lucia Sports Program. Such program makes available to the Filipino youth. Its nationwide network of facilities found in its division, which include basketball courts, swimming pools, tennis courts, and badminton. The project has been administered by the Philippine Olympics Committee acknowledging the immense benefits the country will get in its bid in local and international sports events. 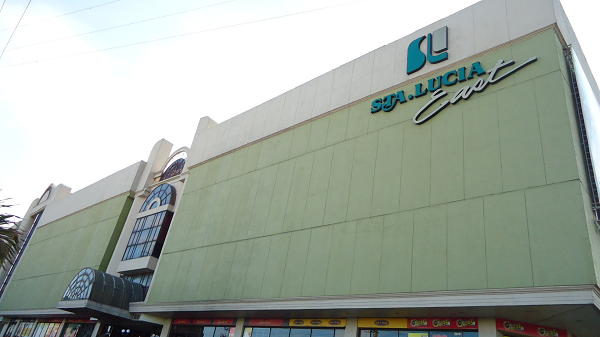 The Brick Road, a food and entertainment enclave that gives guests a more relaxed yet upbeat setting for dining and soothing ambiance.